I talk to myself. A lot. But only when I’m alone at home. I’m not that person muttering to no one in particular while walking down the street or the lady fussing at cans of soup in the grocery store. But my husband has been working from home lately and he’s definitely noticed it. I’m not sure why I do it but talking out loud helps me think. It really started when I began writing. Someone told me to read your script out loud to sort out flow, dialogue, etc. And it works for me. But that’s not what I mean by ‘quieting the voices’.

I’ve taken the last week off social media. No Facebook, Twitter, Pinterest, Instagram and only Tumblr once a day (because that site inspires me to write like no other!). I moved all those apps that used to be on the main screen on my iPhone to a folder on another page. I turned off notifications for everything except texts. It’s been quiet. 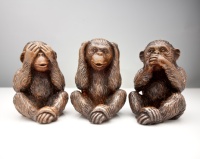 I thought I would go through withdrawals but I haven’t. There have been no urges to check in, post, update or tweet. Before, it was too easy for me to get caught up in it all and my head was filled with noise. Now, I don’t hear Amy Author’s voice saying she completed a novel in one night or Riley Rights screaming about injustice in Timbuktu. I don’t see photos of Patty Perfect’s totally-happy-we’re-all-smiling-if-it-kills-us Holiday in Key West. There are no cute videos of heroic people doing amazing things while I’m just sitting watching on YouTube. There has been none of that. It’s been quiet.

And my mind has slowed down enough to focus on other things. When I sit to write it is easier because I’m not thinking about who is doing what and where and why. I’ve missed keeping up with friends though and when the next week is up I’ll go back. But I will only check in once a day or two and I’ll manage notifications with lists. Because I’ve quieted all the other voices and now the only one I hear is mine. And that’s important when you’re trying to do anything well, but especially when you’re writing.